This morning, with little or no forethought, I decided to go to a heated yoga class. As I dropped… Posted by Carrie Leigh Wagster Huckabay on 21 Jun 2018, 15:31

Oh, Amarillo... Thank you for being a town with the kind of people who call you when they find a… Posted by Carrie Leigh Wagster Huckabay on 20 Jun 2018, 21:59

The mercy is overwhelming. I'm gonna make him strep nachos and see how he likes that. Posted by Carrie Leigh Wagster Huckabay on 2 Jun 2018, 20:44

After 3,000 entries, five finalists in the Amarillo Professional Baseball's Name the Team sweepstakes.“We were overwhelmed with the unique and incredible stories that were told by fans,” said Tony Ensor, President and General Manager of Amarillo Profession

Hello, readers. I mean, there are bound to be at least tens of you now.

For all my subscribers and my immediate family, or all the other lovely people who stumble upon my blog, I have a giveaway! My lovely artist/bible teacher/choir friend Debbie has published another coloring book, and is having a June Bloggers Giveaway!

Oh, right. It's July? Yes, well... See, there was vacation, and no choir practice, and AJ lost my MacBook charger in the pit of despair that is his room, and ...whatever. Debbie surely will forgive me a few weeks.

Nolan and I just got home from a rather nice business trip/weekend getaway to San Antonio, TX. We had plane tickets, but Nolan decided at the last minute that we'd make it a road trip, and talk and bond and so forth. In a rare turn of events, including but not limited to Nolan playing three back to back rounds of golf, Nolan not sleeping well, and me having sat on my rear for several days while Nolan attended dinners and meetings and schmoozing, I found myself driving home from San Antonio to Amarillo.

In the midst of my flu-induced haze Friday evening, I had just enough presence of mind to check the results of this year's cheerleading tryouts. That's right. Cheerleading tryouts. Both of my sons made Tascosa High School Cheerleaders for the second year running. If you thought I was shocked when they told us that they wanted to try out last year, I was even more surprised that they'd want to do it again this year. But they really love it. They both say, "It's the most fun sport" they've ever done. They've been taking tumbling classes this spring, and are committed to Cheer like they would be football or baseball or basketball. And as I checked the results, I was both thrilled and filled with a rather large sense of dread.

Because being a guy cheerleader in a Texas public school is like dangling raw steak in front of a hungry lion to the bullies. 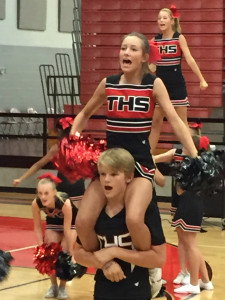 (Aaron with his flyer)

Now let me preface, my younger son was the one who said he wanted to try out for cheerleader first. He'd been injured several times in football, and the doctor said that every time he got sacked, his back was just going to get worse. So the doctor suggested a non-contact sport. So he and some of his friends thought it would be fun to try cheerleading. The friends backed out (shocking) and he was the only one at the mandatory meeting. My older son, who'd had two hand surgeries that kept him from playing his beloved baseball, happened to be with me when we went to the meeting, he took one look at the dozens of pretty girls in the room and said, "Yeah, I'm doing this, too." 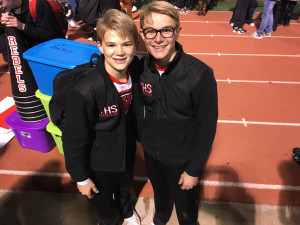 So then we had to tell my husband, arguably a very manly man, even with his BFA in Theatre Arts, that his two sons wanted to be cheerleaders. To his credit, Nolan replied, "I think that's great. I would have done it when I was in high school, but I didn't have the guts."


What was unspoken in that statement, was that my husband couldn't have taken the teasing that went on from his classmates because they'd chosen something out of the norm for a teenage boy.

And the teasing, my friends, is merciless.

I think it would be easier if the people making all the snarky comments were kids my boys didn't know. But it's their friends. Friends that they've had for YEARS. The people doing the bulling are ones that they've grown up with, and now that my sons don't fit in their picture of what a high school age boy should be interested in, are mercilessly mean. The bullying has been anything from verbal abuse, questioning their sexuality to physical assault, resulting in two of the bullies getting ISS. Even the doctor that did their physicals the first year made a joke, "You trying out for cheerleader?" When they replied yes, a little wind was taken out of his sails. And I was furious.

These actions make it very hard for me to love these bullies like Jesus would. In fact, my feelings towards these bullies are more "Jesus in the temple with the moneychangers" than "Suffer the little children unto me."

So it would seem my sons are stronger than my husband, and stronger than I am, because after the verbal beating they took in the past year, I certainly would have quit. When I asked them why they didn't, one of them replied, "You said quitting is habit forming." 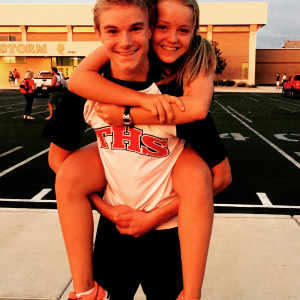 That I did. So, I suppose that my boys will be stronger men when they make it through yet another year of being male cheerleaders. And being strong men of God that rise above the bullies of the world is what we've raised them to be. But it makes my momma heart hurt. All I can do is lift them up, support them from their home base and pray that the bullies get healed of whatever pain is causing them to lash out. 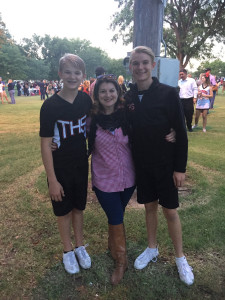 (Me and my sweet boys)

But if the bullies do it in my hearing, I can't make any promises that I'll be as strong as my boys are.

So... you all know how my husband's twelve, right?