The wonder of Christmas is magnified a thousandfold when seen through the eyes of a child.

I've been so blessed to be an instructor for the Amarillo Little Theatre Academy for the past sixteen years.  I love teaching the fine art of acting.  I love the play and the whimsy of it all.  For years, I've also called myself a playwright, having written a smattering of scripts over the years, a few even having been produced.  But this last script was one I adapted from a 175 year-old book.  A Christmas Carol, by Charles Dickens, has been done, and done, and re-done, but I still asked Jason, the Academy Director, if I could write the adaptation for the Academy's production this winter. When he said yes, I went and bought a copy of the book, read it about ten times and then went through it, turning all the prose into stage directions and the spoken bits into dialogue.  I added some things, incorporated some aspects that Jason specifically asked for, added some characters, scenes and dialogue definitely not in the book, and revised.  And revised, and revised.

I spent a big part of July, August and September writing a Christmas Carol, and when I sent Jason the finished copy, I just felt like a failure.  I remember telling my husband, "Well, I finished it, but I don't like it."

Until I saw it.

Jason and the sixty-five person cast (yes, sixty-five students) turned the lackluster script that I assembled into something.... well, absolutely magical.  I saw it last weekend, and was amazed by what the production team had done with my (and Dickens') written word.

But today, I had the pleasure of sitting next to a sweet six year-old girl during the final matinee. All the magic of the theatre, the production values of music, dance, Rosco fog, lights, costumes... the things that I'm trained to scrutinize and evaluate, she absolutely adored. She gasped in delight, laughed, applauded, giggled, made worried noises when she thought the ghosts were scary, and told her mother in a not-so-quiet whisper that Scrooge was not a nice man. She got it.  She got it all.  She loved it.  And because her joy was infectious, she made me love it, too.

Before today, I saw that Jason and our students had turned my work into something a hundred times better than what I saw on the page, but sitting next to that adorable little blonde-haired beauty, I saw more than even that.  She reminded me to be awed by the wonder of Christmas.  Because lets be honest here; I love Baby Jesus, but his birthday sometimes stresses me out. And this little girl reminded me to love what Christmas represents, to keep the good will for my fellow man in my heart no matter what the season, and that it does your heart a world of good to get sucked into a story that you know by heart and even awed by the magic of the theatre.

Thank you to Jason and to the Academy, to the hardest working production team on the planet, to all my students, past and future, who made A Christmas Carol the wonder that it was.  I appreciate all your hard work, hours of rehearsal, making costumes, assembling props, cutting together sound, designing the lights, choreographing dance numbers, designing and distributing t-shirts, organizing a cast party, creating memorable characters, putting on and taking off ghost and old age makeup, and countless other aspects that go into putting up a show.  You are loved, and you've blessed me in the midst of this Christmas season.

What a lovely gift it was. 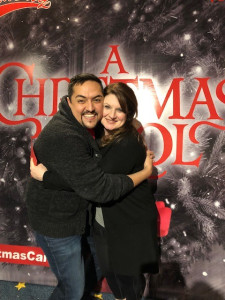 This guy makes everything he touches more artistic. To know him is to love him!
Tags: acting, christmas, teaching, theatre
Subscribe