I've had a crappy week. I mean, CRAPPY. Like you read about. Viewings and funerals and emotional conversations and nightmares and meetings and missing meetings and sleep deprivation and talking to my hospitalized grandmother on her birthday was all topped off by the kicker, being told I was going TO WEAR A SWIMSUIT in the show, trying on said swimsuit, pleading for a sarong, and I'm pretty sure annoying the hell out of the costumer.

Which breaks the one of the cardinal rules of theatre - Don't piss off the costumer. Or the stage manager.

You'd think it would be something like, 'Don't forget your lines," but oddly enough, this isn't the case. ;)

The swimsuit, of course, led to a spiral of self loathing and cellulite-hating. Even though I'm on the HGC diet and spend an hour a day on the elliptical, (there is only so much one girl can do when it's this far gone) I'm still feeling generally fat and ugly and wondering if even auditioning was a bad idea. (Leaning toward HELL, yes.) I haven't burst into tears or anything, but I've considered fashioning a homemade cellulite-sucking device. I won't lie.

But let's face it, I'm crap with power tools, so doing the best I can with what I've got is going to have to do.

Now onto something more constructive: Having gone to more funerals than I ever thought I would in the past few months, I morbidly present to you some:
Guidelines Rules That Will Not Be Broken When I Die or I Will Haunt You All
( Collapse )

Alright, I think that's it. It's enough rules and griping for a Thursday morning, in any case.

And a zillion points to anyone who can tell me the title of the movie without googling the LJ cut!

Have a cellulite free day,

I'd love it if you voted. 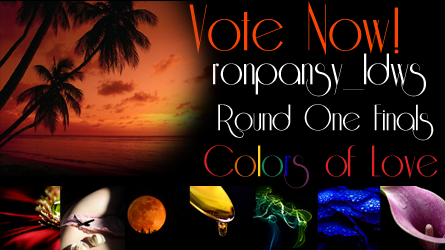 Round One, Finals
Colors of Love
Click the banner to VOTE NOW AT